Even a torrential downpour couldn’t dampen the spirits of Joey Lauren Adams and Brian Vilim, whose outdoor Southern wedding had the perfect Hollywood ending. 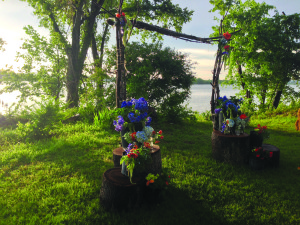 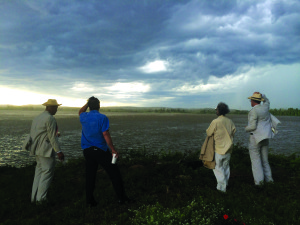 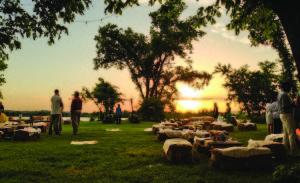 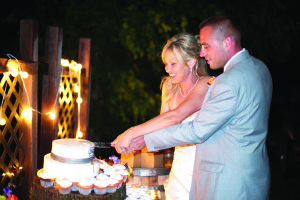 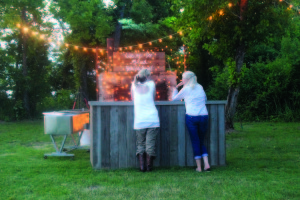 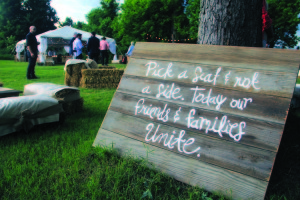 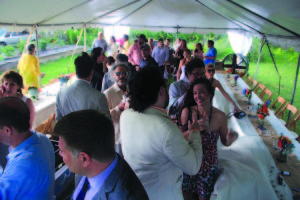 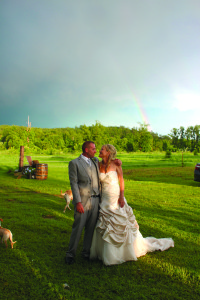 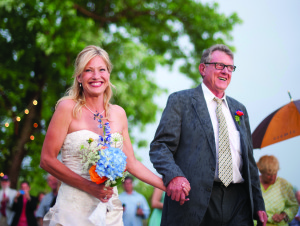 Actress Joey Lauren Adams may have a glamorous career, but when it came time for her to play a bride in real life, she wanted her big day to have a relaxed, down-home feel. Although she makes her home in Los Angeles full time, Adams is originally from the South and lived in Oxford, where she still owns a home, for many years.

For her wedding location, she chose farm­land in Maumelle, Ark., close to where she grew up, belonging to friends Diana and Randy Ashley. The scenic spot overlooking the Arkansas River was lush and green for her June 7, 2014, wedding to Brian Vilim, but that wasn’t the case when she first took her fiancé to visit.

“I took Brian to see it in winter, and it was so ugly. Everything was brown and dead,” Adams said, laughing. “But he was so sweet about it. He said, ‘OK, if this is what you want.’ ”

Even though the land was naturally beautiful by summer, Adams, her family members, and Vilim worked hard on many do-it-yourself projects to make it a suitable location for an elegant wedding ceremony.

“My favorite moments were before the day,” Adams said. “We spent so many weekends out at the farm with my family. We built the bar, we planted grass seed, we built all the little tables.”

They also created seating out of hay bales, including rows of benches for during the ceremony and hay bale sofas for lounging during the reception. A simple canopy arbor made of tree limbs and adorned with tree stumps and flowers served as a focal point against the backdrop of the river. Colorful floral arrangements arranged in Mason jars decorated the long farm tables located underneath a large white tent. Twinkling white lights were strung through the trees. The couple’s dogs, Frankie and Dallas, roamed the property as friendly greeters.

Everything was perfect when the guests began arriving via trolley shuttles. But just before the bride was scheduled to walk down the aisle, the skies opened up into a torrential downpour.

The wedding guests huddled underneath the dinner tent to wait out the storm and made the most of what could have been a frustrating situation.

“Of course it’s disappointing because you have in your mind what it’s going to be,” Adams said. “But everyone really got to know each other under the tent. Guests were texting me telling me what fun they were having. When I finally walked down the aisle, two hours late, everyone was cheering.”

As the wedding finally proceeded, Adams and Vilim took in the beauty all around them and were able to appreciate the meaning of their big day and not stress about the details.

“If it had gone completely perfect, I don’t know how memorable it would have been,” Adams said. “Having all of my people there was the most amazing thing ever. We really wanted them to be there to make the commitment with us.”

And as the couple finally took their vows, Mother Nature surprised them once more.

“The lighting was so beautiful,” Adams said. “And we had a rainbow.”