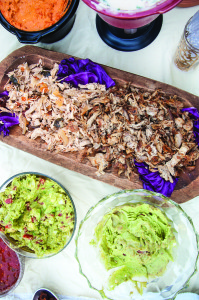 Mother’s Day isn’t the only reason to celebrate in May. It’s also the time to buy a piñata, break out the blender and host a Cinco de Mayo party. The Mexican holiday commemorates the Mexican Army’s victory over the French in the Battle of Puebla on May 5, 1862. The day is also popular in the United States, and it has become an occasion to enjoy margaritas and Mexican fare.

Annie Zeleskey, who runs The Z bed-and-breakfast, hosted a Cinco de Mayo celebration last year on her South Lamar lawn. Zeleskey said the casual and comfortable concept of the celebration, combined with bright and colorful decorations, mariachi music and Mexican food, makes for the perfect party.

According to Zeleskey, the key component of a successful Cinco de Mayo bash is a margarita made with good tequila and fresh-squeezed lime juice (not premixed) and served in a salt-rimmed glass. But just as important as the signature cocktail is making sure guests aren’t drinking on empty stomachs. She suggests preparing a fajita bar with all the fixings, chicken quesadillas and creamy queso dip.

The biggest crowd-pleaser is her fresh, made-from-scratch guacamole, featuring her homemade candied jalapeños. “Put that out with a plate of salty, crispy tortilla chips, and everyone is happy,” she said.

She also said that the laid-back atmosphere of a Cinco de Mayo party makes it an ideal event for everyone, including the host.

“I have a goal to have everything set up 30 minutes before the party begins,” she said. “That way I’m not stressing out last minute when the doorbell rings, and I can just enjoy the party.”

Wearing gloves, remove stems from jalapeño peppers. The easiest way to do this is to slice a small disc off the stem end, along with the stem. Discard stems.

Slice the peppers into uniform 1/4-inch rounds. Set aside.

In a large pot, bring cider vinegar, white sugar, turmeric, celery seed, granulated garlic, cayenne pepper and salt to a boil. Reduce heat, and simmer 5 minutes. Add pepper slices, and simmer exactly 4 minutes. Use a slotted spoon to transfer the peppers to clean, sterile canning jars, filling to within ¼ inch of the rim of the jar. Turn heat up under the pot with the syrup, and bring to a rolling boil. Boil hard for 6 minutes.

Ladle the boiling syrup into the jars over the jalapeño slices. Insert a chopstick into the bottom of the jar 2 or 3 times to release any trapped pockets of air. Add more syrup if necessary. Wipe rims of jars with a clean, damp paper towel and fix on new, 2-piece lids to fingertip tightness.

Place jars in a canner, and cover with water by 2 inches. Bring water to a rolling boil. When it reaches a full boil, set the timer for 10 minutes for half-pint jars or 15 minutes for pint jars. When the timer goes off, use canning tongs to transfer the jars to a cooling rack.

Leave jars to cool, undisturbed, for 24 hours. When fully cooled, wipe with a clean, damp washcloth, and then label.

Salt and pepper to taste

Mix together all ingredients, but don’t mash or blend. Lightly stir, and serve.

Combine all ingredients, stir, and serve.